The wearing styles of Korean people during the Goryeo times

For the first part: The Cost of Being Divided and United: Three Kingdoms’ Period in Korea

The Unification of Goryeo (or Koryo) is one of the considerable events in making Korean history in the tenth century. After Unified Silla lost its power due to social and economic reasons, previous Korean Kingdoms re-emerged. The revival of Baekje and Goguryeo triggered the beginning of the Later Three Kingdoms Period (892-936). These kingdoms’ attempts to unify the Korean Peninsula failed and the unstable climate lasted. However, Wang Geon, as an important maritime lord, dealt with Silla under Goguryeo banner. In 918, Kung’ye of Goguryeo lost his throne due to his oppressive policies and Wang Geon proclaimed his kingship. Taking the name of Taejo (Grand Progenitor), he militarily eliminated Baekje and annexed Silla. After the unification, Taejo also accepted Balhae’s refugees and married women from hojok (lord) families to strengthen his position. His successors implemented various novelties such as Slave Review Act, civil service examinations (Kwager) and Stipend Land Law. Although these steps did not destroy the power of the aristocracy, the central authority gained much power. Along with this transformation, more people could take the opportunity to get political positions unlike Silla’s restrictive selection system based on true-bone members’ lineage. In this respect, it can be argued that Goryeo unified the peninsula thanks to its military power and alliances and ensured its strength by applying diverse reforms and marriages. These reforms emphasis on central authority without destroying aristocracy caused the depiction of the Koryo as “a centralized aristocratic society”. Additionally, these reforms made opportunities for political participation easier than Silla in connection with the social status system. 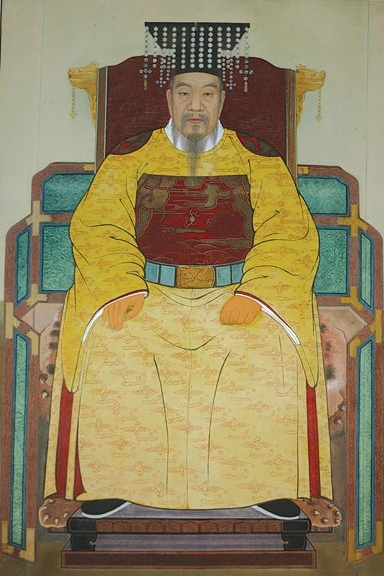 King Taejo of Goryeo married 29 women from aristocratic households for consolidating his power.

In the first place, military and political power of Goryeo assisted to unify the peninsula and social and administrative measures helped Goryeo to ensure its strength. In this context, United Silla’s social structure of bone-rank system prioritized a few aristocrats in the government and made them strong. This class structure weakened the central government and regional lords (hojok) spread the countryside. Over-taxation’s burden also prepared peasants’ revolts. At last, the United Silla fragmented with the military officer Gyeon Hwon’s revival of Later Baekje in 892, and the Buddhist monk Kung Ye’s revival of Later Goguryeo in 901. Nevertheless, these kingdoms could not unify the Peninsula and Kung Ye’s repressive policies like executing numerous people including his family prepared his loss of throne in 918. After the depositions, hojoks raised Wang Geon to the throne because of his military victories over Later Baekje. Also known as “Taejo” (Grand Progenitor), he changed the kingdom’s name to Koryo and moved the capital to Kaesong. He also declared that Goryeo is the successor of Koguryo. Taejo allied with Silla against Gyeon Hwon of Later Baekje but failed to defeat him at first. However, the balance of power shifted towards Koryo with victories over Later Baekje in 930s, and Silla peacefully accepted its annexation to Koryo in 935. In return, Taejo incorporated the ruling class of Later Silla into the Koryo. In 935, Gyeon Hwon was imprisoned by his eldest son but he escaped to the Koryo to get assistance. Taejo and Gyeon Hwon’s alliance conquered Later Baekje and unified the peninsula in 936. He also accepted the refugees of Balhae and claimed the northern parts of the peninsula. He ensured his state’s strength in marrying 29 women from local gentry families and secured his political alliances with them in this way. 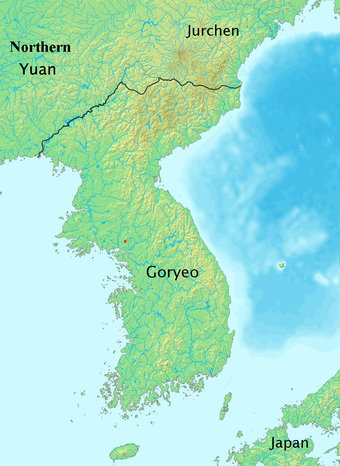 The Map of Goryeo at its height in the 11th century

After the unification, kings’ efforts to centralize social structure without destroying aristocracy’s power can be considered as the reason for the depiction of the Goryeo as a “centralized aristocratic society”. Taejo’s fourth son King Kwangjong (949-975) began reforms to consolidate his authority. In 956, his Slave Review Act freed commoners enslaved by the local gentry. Hence, this step decreased the power of the local gentry and restored the free status for commoners as Eckert underlined. The second move was to implement Kwager, civil service examinations based on the Chinese system in 958. These examinations will fill the bureaucracy with new educated and loyal bureaucrats in the reign of Seongjong. This also consolidated central authority and downgraded the power of local gentry. His successor, Gyeongjong, instituted the Stipend Land Law in 976 to support the central government. The new law allowed land to the officials and the state managed the collection of land rents. When officials died, the state was taking land back. The next ruler, Songjong (981-997) promoted the views of the Confucian scholar Ch’oe Sung-no. Ch’oe aspired to create an aristocratic society with a centralized power structure. Seeing Silla’s decentralized structure during its fragmentation, he defended centralization. However, he opposed the royal absolutism who would eradicate the aristocracy. In this regard, Songjong appointed his officials to administrate the provinces after he established the three chancelleries at the centre and twelve provinces in the countryside in 983. In provinces and two military zones, officials served to the state through their management.

III-The Expansion of Political Participation and Social Oppurtunities in Korea: The Impact of the Goryeo

The Banner of Goryeo. Goryeo was the sole power in the Korean Peninsula for four hundred years after the fall of United Silla

It might be highlighted that between the Unified Silla and Koryo, the Koryo had more political participation and opportunities given to the people in connection with the social status system. To illustrate, in Silla, the true-bone members of the royal lineage were at the heart of the politics. Other clans could not participate in political activities since the true-bone members closed their ways. However, Eckert argues that the emergence of a new ruling class in the Koryo necessitated a remodelling of the social status system. Therefore, the Koryo drew on aristocrats from many different clans and the members of the hereditary aristocratic houses could participate in political life. Along with üm privilege, higher-ranking officials’ sons received appointments to office. Besides, local functionaries, clerks, and soldiers could advance into the central bureaucracy thanks to the Kwager system and other services. In Silla; however, large numbers of men couldn’t become government officials. Nonetheless, lineage background did not utterly lose its importance but accessing politics was more open in the Koryo. Ordinary people like farmers and slaves could not able to rise in politics in the Koryo.

In conclusion, the process of the unification of Goryeo was a milestone in Korean history. The Goryeo united the peninsula in pursuing a successful military strategy and applying social ties with the local gentry through alliances. This centralized aristocratic society improved thanks to its innovations in many fields such as administration and bureaucracy. These innovations in the social status system also provided opportunities for more people in political practices, unlike Silla. It can be concluded that the Koryo’s these successful practices would have helped its survival until the fourteenth century.

Chang Po-Go: He was a powerful maritime commander who dominated the Yellow Sea under Silla banner in the ninth century. After Silla’s assistance, he constructed the Cheonghaejin Garrison on Wando Island and eliminated piracy activities by using this base. He also controlled commerce between Silla, Heian Japan, and Tang China. His navy’s activities accelerated economic improvements in Korea. However, his support to Gim Ujing to be the king prepared his end. The new king was killed by his enemies and they also assassinated Chang in 846.

King Kongmin: After his political hostage in Yuan Dynasty, he was the king of Goryeo between 1351 and 1374. After Yuan’s fragmentation, he removed Mongol officials from their positions and tried to eliminate Mongol-favored gentry. In this period, Japanese Marauders plundered the Wae and this pushed Goryeo into a serious crisis. Their invasions took various forms based on the west coast of Japan. Kongmin’s generals Yi Seong-Gye and Choi Yong dealt with these looters. The Red Turban’s invasion of Korea was also prevented. As a Buddhist monk in Koryeo, Shin Don’s advice influenced the king. New Confucianism also gained power in this context. The death of his wife Queen Noguk, a Mongolian princess, destroyed the king’s mental and physical health. Finally, he was killed by his opponents.