For the second part: Make Korea United Again: The Unification of Goryeo (Koryo) in the Medieval Age

Three Kingdoms of Korea is one of the considerable eras in Korean history in terms of its political and economic developments as well as social and cultural exchanges. For about six centuries, there were conflicts between three major powers as Goguryeo, Silla, and Baekje. China and Japan also played major roles in making this epoch through their relations with these entities. Ultimately, Silla achieved to consolidate many parts of the peninsula and established its rule in the 7th century after the Unification Wars. It is worthwhile that there are several issues and arguments regarding that period in historiography. The relationships of the Three Kingdoms with foreign states, the causes of Silla’s success in the unification and its importance, and the place of Unification Wars whether interstate conflicts in Northern Asia or various struggles in just the Korean peninsula can be considered as the major issues. It may be said that the foreign relations of the “Three Kingdoms” were continuing, changing, vivid and complex in having mutual influences. Besides, Silla’s accomplishments may be the consequences of its strong army and commanders as well as the support of the Tang Dynasty. Silla’s unification was a crucial step in making Korean history for many reasons in spite of some negative claims. Because of foreign interventions, it can be regarded that the Unification Wars became interstate conflicts throughout Northern Asia.

In the first place, it can be argued that the foreign relations of the Three Kingdoms were changing, continuous, complex, and vivid in terms of multi-faceted dimensions. In this context, Carter Eckert claims that the Three Kingdoms adopted three policies towards China as pursuing expansionist policies, taking advantage of the struggle between Northern and Southern Kingdoms of China, and finally adopting the elements of Chinese culture for their developments. Initially, Goguryeo’s expansionist steps can exemplify the first and second policies. While King Gwangaeto took over Liaoning from China by using military forces, his son Jangsu (413-91) manipulated the northern and southern states to his advantage and achieved to consolidate his power.

When Sui (581-628) unified China, Goguryeo allied with the Turks to deal with Sui. Tang, which replaced Sui, pursued the same policy but was ultimately defeated by Silla after unification. When it comes to Japan, these relations frequently altered according to political circumstances. For example, Park argues that there was a strong friendship between Baekje and Yamato Japan until Silla captured Han River and its surroundings from Baekje in 672. After that, Yamato formed strong relations with Silla and neglected Baekje. Seeing this, Baekje turned China to improve relations for compensating for this loss. Goguryeo also applied a friendly policy towards Yamato to undermine Baekje. Besides, those kingdoms involved in various cultural and commercial activities with foreigners. To exemplify, the adoption of Buddhist and Confucianist elements as well as the Chinese writing system in Korea are the basic results of this contact. Eckert argues that this process also helped to form the administrative structure in bureaucracy. In this respect, Chinese and Korean scholars came to the courts and spread Chinese culture and ideas throughout the peninsula after their education in China. As a result, Goguryeo (in 372), Baekje and Silla (in the 6th century) adopted Buddhism and established Confucian Academies. As for Japan, the Three Kingdoms played a pivotal role to carry Chinese elements. Particularly, Baekje sent scholars, Buddhist figures, and other cultural resources to Japan. This intermediate role between Japan and China made the Three Kingdoms more vivid as a trading partner. When it comes to trade, there was a strong web of import and export between these powers. While Asuka Japan was exporting military equipment, Baekje provided writing devices and steel for Asuka. In another direction, while Northern and Southern Kingdoms were selling their silk, weapons, writing materials to Goguryeo; in return, it provided their gold, silver, pearls, and textiles for China. There was also the rising influence of art and architecture between them in this period.

Reasons which led to the Unification

It can be emphasized that Chinese support and having a strong army with powerful leaders enabled Silla to complete the unification. For example, Silla requested military assistance from Tang against Baekje in 660. In this case, Tang sent 130.000 soldiers to the Silla as support. When Silla attacked Baekje from the west, Tang assisted with fresh forces from the east. Therefore, Silla captured Baekje domains and the alliance also caused the fall of Goguryeo in 668. Thus, Chinese aid has a clear prominence for Silla in defeating their long-standing rivals. Without this assistance, it could be hard for Silla to complete the unification. Moreover, Silla’s army played a key role in this process. General Kim Yu-Sin led to the unification of Korea by recruiting more soldiers than others and enabling discipline and education in the army. The successful leadership of King Muyeol and Munmu of Silla also considerably contributed to the unification.

Some authors blamed Silla for the alliance with Tang and the loss of Manchuria due to this. However, the unification by Silla is significant for many reasons. Firstly, it preserved the independence of the Korean peninsula as Eckert claims. For Eckert, Korean culture could not have developed under Tang. This is because the development of Korean culture weakened during the Four Han Commandries in the 1st century. However, Korean culture successfully lasted to develop under the United Silla. It is important that Korean communities also maintained their independence although the unification could not cover former Korean lands like Manchuria. It would be said that the unification made easier to protect the peninsula against foreign assaults. For instance, Tang could defeat a divided Korea but could not do the same thing against the United Silla.

The Meaning of The Unification Wars 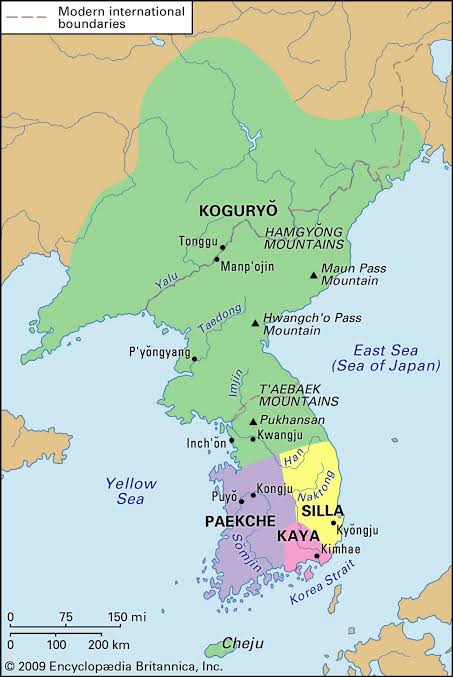 Apart from this, although the Unification Wars have been perceived as mere struggles among the Three Kingdoms for supremacy by several historians; however, the participation of Tang in battles and various reactions from other powers can make the Unification as a part of interstate conflicts that covered Northern Asia. First of all, as indicated above, China had expansionist objectives within the Korean peninsula. By subjugating Goguryeo and Baekje, Tang aimed to expand its borders towards Korea. Hence, the Chinese army fought different parts of Northern Asia against Goguryeo. Similarly, Goguryeo also aimed to maintain its dominance beyond the peninsula like Manchuria. Moreover, after Baekje’s fall, Korean rebels applied for Wa of Japan to get military assistance. Japan agreed to send 30.000 soldiers to the rebels but a joint Silla-Tang force annihilated the Japanese army in 660. Additionally, Tibetans rebelled against Tang and Tang’s attempts to halt this insurrection facilitated Silla’s way for unification.

In conclusion, the foreign relations of the “Three Kingdoms” were continuing and changing according to power relations and economic interests. Their relationships were also vivid and complex with reciprocal socio-economic, political, and cultural influences. Other than that, Silla’s increasing power might be related to the Tang alliance and its army on the battlefield. Silla’s unification provided Korean culture to flourish more effectively. As united, Korean communities resisted foreign invasions more powerfully and independently. These positive aspects would make the claims of those who accused Silla of collaborating with Tang and losing Manchuria reconsidering. This crucial step for unification also turned into interstate conflicts in larger geography mainly because of Chinese and Japanese objectives. It can be ended that the fundamental arguments in the history of Korea could be challenged, refuted, or revisited thanks to counter-evidence in the instance of the Three Kingdoms and aftermath.