Have you ever had an opportunity to analyze your images in your life-span? If you answer “no”, this small but substantial work will help you to understand images that cover our life completely better.

This work consists of a composition which unites the lecture notes of HIST 210 and some articles within a different shape.

Our life is being deeply influenced by our images or other people’s images on Instagram, Twitter, or Facebook. In today’s world, it is necessary to take good photos for getting more likes from other people. Like nowadays, people wanted to understand their environment and made pictures of them for that reason. Apart from this ambition, they also drew their religious judgments, national sensations, or economic situations in pictures.

In that respect, images are in a way have exemplified our standpoints throughout the past. Like every object or subject in our life, images could be read via a variety of methods. I mean, let me explain myself,  we cannot just read President Trump’s last tweets or speeches in the political arena. Their pictures also can give some senses to be read. At the moment, your minds say “Oh, my man, no, how can we able to read their pictures? I’m leaving. I need to post more of my selfies on Instagram. I want to be a preferable person with my beauty“, you can go. Other than that, let’s start! 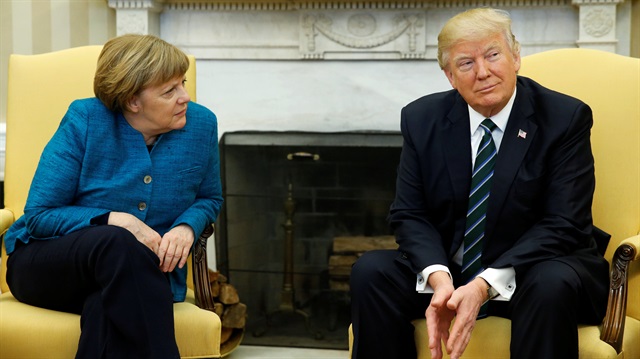 Donald Trump and Angela Merkel are two leaders that have quarrels beginning from the first day. Like many photos, this one is also interpretable but how?

“Reading images” is an artistic concept that was called differently in art: ICONOGRAPHY!

ICONOGRAPHY: The formal name of Reading Images in the academic environment. Normally I want you to forget academic narrow words but now that word is, unfortunately, necessary to understand the rest of my work.

This term is also called iconology or iconography. It is not the same thing with “icons” in messages which you send and get. This concept was introduced to “academic” art history in the 1920s to 1930’s reaction against old formal analysis. The formal analysis was giving importance to just who is seen in the pictures. Today we all analyzed pictures in this simple way.

I shared Chancellor Merkel’s photo since this new movement started in a country in which famous people lived from Hitler to Nietzsche. Yes, you’re right to regard true place. Deutschland, Deutschland, über alles/Über alles in der Welt . I don’t know German, anyway. Turn your face to a famous commercial harbor, you see, between the east of Strasbourg and the west of Berlin. Welcome to Hamburg!

In the 19th century, Friedrich (not Nietzsche) Ast is such a pioneer guy that prepared the way for interpreting texts. This is called today HERMENEUTICS. Why this word? You don’t know. Neither do I. Anyway, he offered that all texts would be examined in three levels.

You are murmuring: “Hey you! Hands up! You are promising to analyze pictures but your hidden intention is writing.” Don’t move! The German tradition of int. texts applied to German images in the early 20th century. These German guys wanted to understand the pictures and treat like texts are what they say. Like in texts, there are different levels in analyzing pictures. Turn your eyes to Hamburg. 1920’s Hamburg. Hitler is not a famous orator or dictator at that time.

The Warburg School in Hamburg of 1920

Erwin Panofsky wrote an essay and proposed an approach based on German hermeneutics. According to him (meaningless interpretations are mine):

Everything is being criticized. This one is also open to criticism.

First of all, you can get it true, interpretations (put aside mine) remains subjective (of course we do not measure the weight of politicians) and speculative (maybe two did not even remember Macron).

Secondly, often one meaning is given, but meaning to whom? The meanings come from different people in different ways. Artist, patron, other contemporary views are all together and naturally different. I added the President of France to be remembered in this dialogue but an Indonesian perhaps thinks his president in that framework. An artist could disregard politics and considers maybe just yellow armchairs. After a century, this photo will probably gain different meanings. Who knows?