Feudalism, which emerged gradually in Western Europe with the disintegration of the Carolingian Empire, is a key period for European social and political history. With the centralized kingdoms losing the power to protect their subjects, people began to look for new ways to defend and protect themselves from danger. (Duiker, 285) At this point, people began to enter into the service and domination of a ruler (lord) by making contracts in return for his protection. The new social organization, feudalism, symbolized by this mutual contract between vassals (protected) and subordinates (protector), determined the direction of European history for several centuries. In feudalism (Larousse, 96), which spread an aristocratic order in the absence of centralized power, the lords (seizens) transferred the lands known as “fief” (manor) to the vassals in return for their loyalty at the oath ceremonies and offered them various rights on these lands. Accordingly, the peasants living in the fiefs were also responsible for presenting the vast majority of their products to their lords. Along with other drudgery and taxes, many peasants became impoverished by becoming serfs. The wishes and demands of the vassals were other factors that made the peasantry difficult. In fact, many villagers could not leave their fief or marry someone from another fief. In this system, which was the basic unit of rural administration in the Middle Ages, the villagers, who made up the overwhelming majority of the population, left their freedom to the seigneurs in return for a security guarantee and turned into a group bound to the land and responsible for service. (Duiker, 301). In this system where the church was strong, aristocratic knighthood based on religious ethics assumed a decisive role in many political developments.

Since the end of the 11th century, the death of thousands of knights and vassals in bloody and continuous struggles such as the Crusades, which mostly targeted Muslim societies, and the Hundred Years War, which emerged with the fight for the throne between England and France, formed the political pillar of the factors that broke the power of feudalism. Along with the wars, socio-economic factors such as the birth of innovative agricultural practices, the revival and expansion of trade in centers close to the high seas, and the rapid population growth that accompanied the growth and expansion of cities in these centers loosened the tight ties of feudalism. (Duiker, 299) Parallel to these new conditions in which the labor force increased, the plow was replaced by the plow, and rotational rotation, in which the land was used more efficiently with less fallow, became widespread, unlike rotational agriculture that adopted long-term fallow. (Larousse, 102) The testing of new crops during the rotations would increase profits and the villages would further increase their production volumes in response to the demands of growing cities. It can be argued that technological developments such as the increase in the number of water and windmills also contributed to the weakening of feudalism. On top of all this, in the Black Plague (1347-53), when the European population melted, the peasants were deprived of their material resources and dealt a blow to agriculture. Against these conditions, many peasant uprisings took place. (Duiker, 490) Although these revolts did not overthrow feudalism, it was a development that shook the old authority of the lords. On the other hand, the organization of new occupational groups that emerged in urban society in guilds and their rapid enrichment increased the foundations of another class known as the bourgeoisie. (Duiker, 309) The nobles in the city, especially the merchants, began to compete with the aristocrats living in a closed state in their castles. (Larousse, 103) The kings, who took advantage of the gap opened by the bourgeoisie, who took the Mediterranean and North Sea trade under their control, had the opportunity to reinforce their central authority again. Innovations in weapon technology also contributed to the kings’ smashing against the durable castles of the aristocrats.

In addition to these social events, new developments that shook the political ground of Europe occurred from the 15th century. The European discovery of the Americas and African continents meant finding a unique source for trade. (Larousse, 130) This resource had a significant share in increasing the wealth of the bourgeoisie and centralized kingdoms. Reform movements also damaged the power of the Catholic Church, which was an important source of power like the aristocracy. In addition, with the Renaissance, the new urban society found new ways of expressing and expressing its existence in architecture and art (Duiker, 510). Finally, from the 17th century, the kings, who expanded their central authority, gradually increased their control mechanisms. Thus, absolutist regimes emerged in many European countries such as France, replacing feudalism. This regime, in which a strong and central government was adopted, would determine the new color of Europe until the French Revolution. (Larousse, 164)

In this age, cathedrals played an undeniable role with their versatile functions. Apart from being religious landmarks as holy learning centers, they had robust links with urban life and its activities. So, the connection between cathedrals and urban life can be identified in administrative, commercial, and cultural ways. Initially, cathedrals were at the heart of the state building in the 12th and 13th centuries. To exemplify, the French parliament was established beside the Cathedral of Sainte-Chapelle. In this case, cathedrals of Saint-Denis and Paris competed to become the power center in France. They maintained their importance so that Napoleon’s coronation took place at the Cathedral of Notre Dame. Cathedrals also functioned as trading centers as they can be found at the Cathedral of Saint-Denis and Hasse.

There was a profound relationship between faith and commerce at Saint-Denis since Abbot Suger mainly increased the cathedral’s revenue thanks to the gathering of merchants with the Fair of Lendit. Additionally, several scenes depicting customers, merchants, and bishops can be realized at Hasse. In these paintings, ecclesiastical authorities played a key role in solving issues between traders and clients. Eventually, cathedrals contributed to the rise of cultural activities as intellectual centers in urban life. To illustrate, the University of Paris on Mount Saint Genevieve was founded in the south of the cathedral of Notre Dame. Scholars from cathedrals like Peter Abelard reflected urban values in their writings. As a literary product, the Fabliaux (little tales) also narrated the urban lifestyle with the relationship between the clergymen and ordinary people.

Two main types of architecture dominated the Medieval Era as Romanesque and Gothic. Although Romanesque came first and brought about new technical innovations, Gothic later dominated the architectural panorama of various Western European cities and effectively lasted until the Renaissance. There were a variety of ways in which Gothic differentiated from Romanesque. The first feature that distinguishes Gothic cathedrals from Romanesque ones is having larger windows and stained glasses (Wilkinson, 12). This property enabled Gothic buildings to be lightened much more such as at Saint-Denis or Notre-Dame in Paris. Contrary to these examples, Romanesque churches have smaller windows and fewer stained glasses. In this respect, Cathedrals of Saint-Sernin and Poitiers in which darkness dominates interior parts might be given to identify smaller windows and less stained glasses in Romanesque structures (Wilkinson, 13).

In addition to this, Gothic is different from Romanesque in terms of the style of arches. Pointed (or broken) arches are the most common form in Gothic to structurally strengthen any construction. This characteristic can be identified in a variety of buildings over time from the west façade of Notre Dame in Paris. On the other side, rounded (or basket handle) arches that are weaker than pointed ones were primarily used in Romanesque cathedrals. Apart from interior parts like arches and windows, there are several differences that can be easily found in outside appearances too (Wilkinson, 13). For instance, Romanesque fortress and castle-style exteriors have lesser decorations than Gothic structures. Contrary to Romanesque’s simplicity in the exterior, Gothic exteriors are more ornamental and stylish with various decorations such as gargoyles whose function is still debatable. These properties might be realized at Notre Dame in Paris.

Given all these distinguishing points, it can be said that Gothic architecture signified technical innovations in cathedrals and other sorts of buildings. The reinforcement of the shafts that support wide and high ceiling vaults can be regarded as the initial technical innovation of Gothic architecture (Kishlansky, 262). In this system, massive pillars might be found under cathedral walls or around the nave. By using composite piers, other columns are designed less massive. Compound piers or detached shafts would be realized in many cathedrals like Saint-Denis and Notre-Dame. A set of ribs strengthen wide and high vaults, transferring the ceiling’s weight towards the ground in this context.

Secondly, a bay pattern of construction in modules would be identified as the second technical innovation. (Kishlansky, 263) The Cathedral of Chartres or Sens can demonstrate its effect in this respect. Successive identical units divided the nave into parts with regular and repetitive bays, making cathedrals durable and resistant to any hazard. It is debated that scholastic philosophy had an impact on this style since it intended to search for a language in which authors like Abbot Suger would logically substitute or insert their ideas as Gothic builders did in their cathedrals (Wilkinson, 13).

Eventually, pointed (or broken) arches improved Gothic cathedrals with the flying buttresses. While pointed arches made buildings stronger than before, the flying buttresses united them inside and outside parts (Wilkinson, 14). Several instances from Reims to Chartres would exhibit the significance of flying buttresses in reinforcing the structure of cathedrals. In this multi-layered style, forces have a prominent place, opposing each other by holding cathedrals against probable incidents. Moreover, lower and upper flyers withstand the vault’s lateral thrust and high winds respectively (Kishlansky, 263). 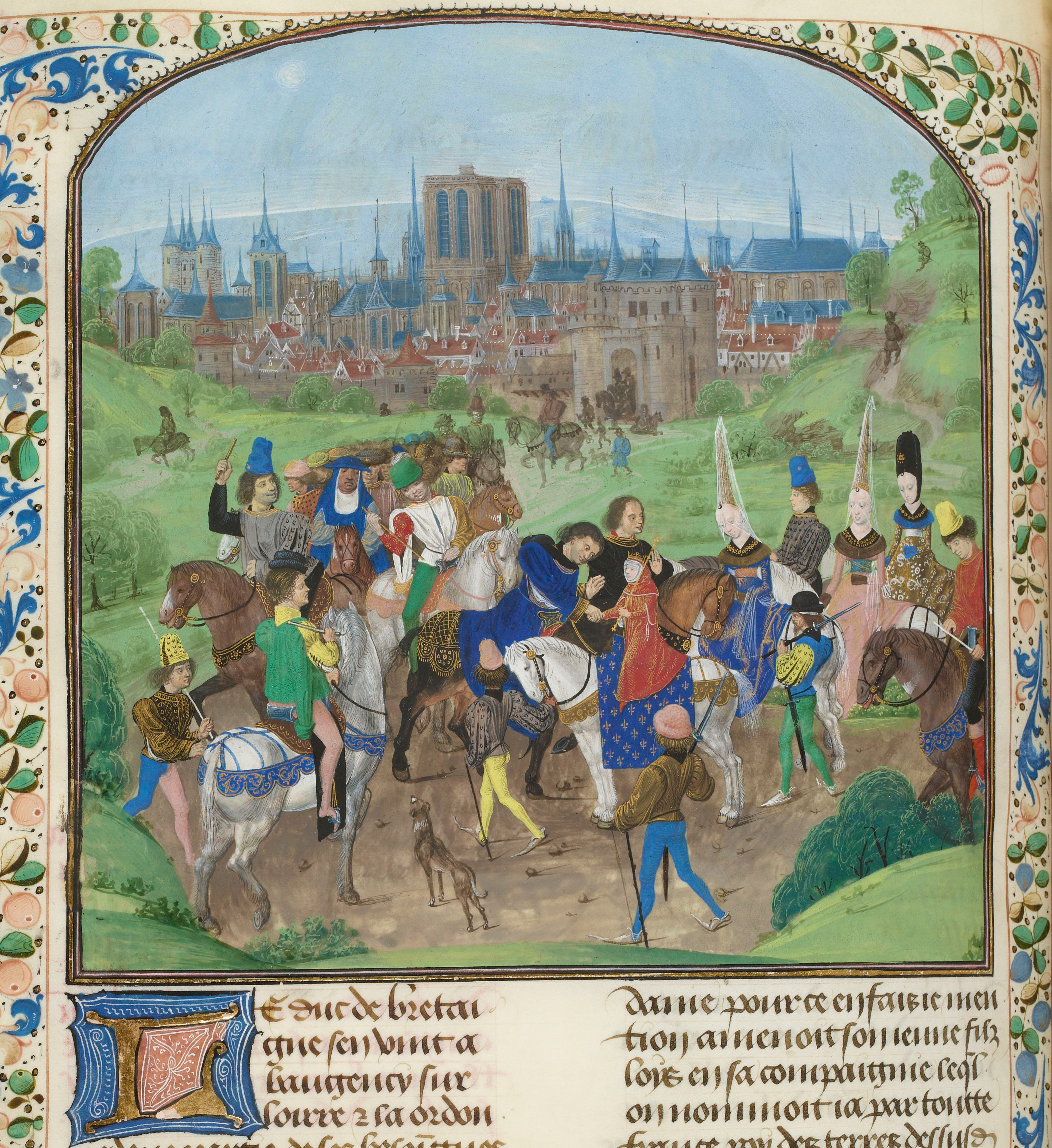