Small note: I wrote this short book analysis for our high school magazine in 2015 -this could not be published, anyway- and now happy to share with you in English. I highly suggest you to read the book! Enjoy literature!

Hesitations that travel around the curves of our brains can tremendously disturb us. We are all aware that when determining our attitudes towards the events we encounter, we should choose only one of many different ways. However, we think until we choose the way we go, we think for a long time, we think until the last point of our mind. And the decision… Whether it is right or wrong, your direction becomes clear and wherever your compass (mind) points to, you are heading there again…

Does the decision making process work for all of us? Or is this argument my bias? I do not think so; probably. There have been issues where we have been undecided. Well, could you hesitate for a long time if you were to make a decision that would deeply affect your life? Would you believe in the benefit of doubt? Whether you believe or not, I want to introduce you to one of our best novels depicting hesitation.

Bir Tereddüdün Romanı was published in 1933. Its writer, as you know from the headline, is Peyami Safa. Our novel has three main characters. The novel begins with hesitations about reading a book by the first character, Mualla, the other character, “the writer”‘s book (whose name is not mentioned in the novel). Then the narrative continues as she decides to read it. Having the opportunity to meet the author, Mualla has philosophical and literary conversations with the “writer”. One of them is on “book”, my favorite sentences in this section are:

Writer and Mualla are influenced by each other. Mualla represents the traditional life but was open to other cultures even though she could not completely embrace. Finally, the author proposes Mualla to marru. However, he says that she should think well in this regard. What a beautiful and romantic story you can say. But… People gathered around cafés in Roma (1939)

At an unexpected moment we encounter the last important character of our novel: Vildan. Vildan, who goes to Rome for education, lives a bohemian life. She cannot find peace in Italy where Mussolini is dominant and comes to Istanbul again. Knowing the author and “Western culture”, Vildan is ready to do anything for marriage. When I say everything, I mean, she tries every way to disrupt “traditionalist” Mualla. Finally, Vildan sends a letter and invites the author to her home. If the author leaves the letter unanswered, the girl will commit suicide. However, the author prefers to stay in the hotel room. It is noteworthy that our author has no home. In the morning, Vildan goes to the office of our writer and gets a definite promise from the author. We see in the flow of the novel that the writer also fell in love with Vildan mainly due to her physical attractiveness and knowledge about “Western” way of life. So, the author hesitates between two different women who have educated themselves in two different cultures.

Vildan makes numerous confessions to the author at dinner: his real name is Angel and his lover in Italy left him. Confused after hearing this, the writer hesitates about whether Vildan is lying. In the last part of the book, dialogues increase between Vildan (Angel) and the author. But Vildan, who is fully drunk, falls into a coma. The author, who sees this view, speaks in an impressive style:

Always hesitation, hesitation. This is the novel of a whole post-war generation … Humanity has never hesitated like Post-1918. This is for sure… Everything, like a tree with a lightning strike, will not collapse by crackling. This tree is shaken only by a large hurricane. This soul depression called “the disease of the century”, this suspicion and hesitation, this need for displacement and escape is coming to an end We feel it. That sleeping woman and all those who look like her are the last victims. (Page 188)

And the writer makes long philosophical and political comments about the 20th century.

The author watches Vildan in her sleep with the first lights of the morning and leaves the house afterwards. He expresses the discomfort of Vildan Hanım to her maid he saw at the door, and gives some advice. Our writer, who says “Neither she, nor Mualla!” walks towards the unknown. 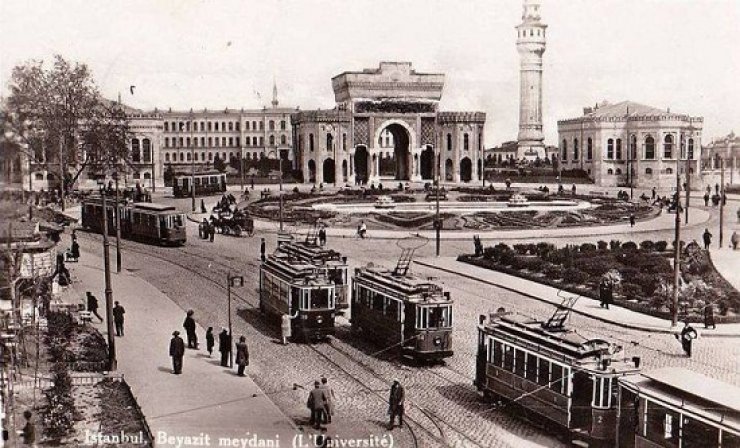 A view from Beyazıt Square, Istanbul in the 30s

In short, “A Novel of Hesitation” (1933) tells the hesitations of people living between the two great wars through the example of marriage, and explains that this instability causes not only socio-economic but also psycho-mental distress in humans.