(This is the second part of my presentation that I demonstrated for our HIST 310 course. Numbers indicate slide numbers in order. For the first part: https://aksubatuhan.wordpress.com/2020/05/20/the-united-states-in-the-80s-i-ronald-reagan-and-his-foreign-policy/)

20-The political developments that ended with the Soviet downfall also allowed American cultural and technological products to be consumed in a wider geographical area. American brands influenced all other countries. The tendency for consuming popular American products and embracing American customs was frequently named Americanization but also called McDonaldization and Coca-colonization. Sociologists largely discussed whether this was a sign of American cultural imperialism or the homogenization of cultures because of globalization.

21-Let’s start with McDonald’s. The owner, Ray Kroc, popularized McDonald’s by using new methods to rapidly deliver burgers to as many people as possible. As a Republican, Kroc supported Reagan. By the time he came to power, McDonald’s served in 26 countries. In Reagan’s term, McDonald’s restaurants opened in 22 new countries including Turkey and the number of its outlets rose from 6000 to 10.000. Famous clown, Ronald McDonald, advertised “happy meals” to children in funny ways. Let’s watch Ronald’s advertisement, not Reagan, but McDonald for 30 seconds.

23-Incumbent President Trump’s approval of McDonald’s for distribution at the White House can be perhaps seen an indication of the continuation of promoting McDonald’s.

24-The spread of jeans was also a byproduct of “Americanization”. The transformation of clothing style from traditional long skirts to jeans can be observed in a commercial of Levi’s. Let’s watch it not only to see the flow of time but to witness the shift in garments. It is important to note that the Cold War’s impact was also reflected in this advertisement by enlisting a soldier.

25-Apart from this, Yuppies emerged in business life as a new social label. Meaning young urban professionals, Yuppie denoted a young professional who works in urban life. Investopedia writes that they are “often characterized by youth, affluence, and business success” and “like to show off their success by their style”. Dan Rottenberg from Chicago magazine coined this term by exemplifying their “rising tides”. There were several handbooks published on how to be a yuppie. Most of which exemplified Trump as the greatest model.

26-American pop music was considered to be a common music form in this decade. Particularly, Michael Jackson had prominence in disseminating pop music. His most famous album, Thriller, broke various records including the most-selling album in 32 million copies. Rolling Stone interpreted that “It’s hard to imagine the present-day musical landscape without Thriller, which changed the game”. Jackson received awards from Reagan thanks to his support for domestic policies. You see below that a Turkish newspaper underlines Reagan’s alliance with Jackson. Other than that, MTV’s launch had a large credit in the development of American music forms on a global scale. 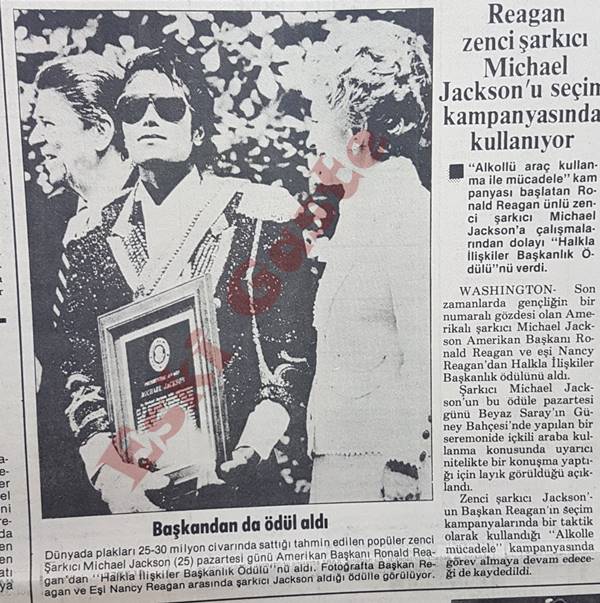 27-The development of computer sciences was another turning point. Although the foundation of Microsoft and Apple was in the mid-70s, two companies realized major moves in the 80s. While Bill Gates released Microsoft Windows that you see a SS from in 1985, Steve Jobs introduced Apple Macintosh you see on the below-right in the previous year. Two popular figures will draw the future of PC technology. Reagan promoted Jobs as you would see above. Video games also saw a boom with Japanese games in American markets like Pac-Man and Super Mario. Despite a crash, the gaming sector survived with recovery.

28-The space race and astronomical developments went on, too. Carl Sagan’s series of Cosmos even assisted ordinary people to learn astronomy’s basic blocks in 1980 but he criticized Reagan due to the nuclear race. Stephen Hawking also attempted to teach astronomy at a basic level in A Brief History of Time. Science-fiction also developed in this way. The last two films of Star Wars trilogy released in the 80s and, as emphasized, inspired Reagan’s arms race. The launching of Space Shuttle Columbia to be orbited in space was successful but the explosion of Challenger in 1986 was a major disaster for NASA which lost 8 members of.

29-Finally, Reagan’s relationship with Turkey was a good one. President Evren and Özal met him and supported his policies. Reagan viewed this as “revitalization of relations” and Turkey as “the model country” (June 26, 1988, Hürriyet). Özal’s opponents blamed him for forcing Turkey to American life-style. Businessmen also had a fruitful place. While Trump and Özal met in the United States, Sabancı simultaneously visited Reagan. You can aware of this through newspaper headlines (January 28, 1993, Milliyet). These occasions also provided the Turkish economy to embrace neoliberal principles in a market economy.

Thanks for your patience to listen to me.

That’s the end of my presentation.

5-https://www.mcdonalds.com.tr/tarihcemiz :The history of famous company in Turkish